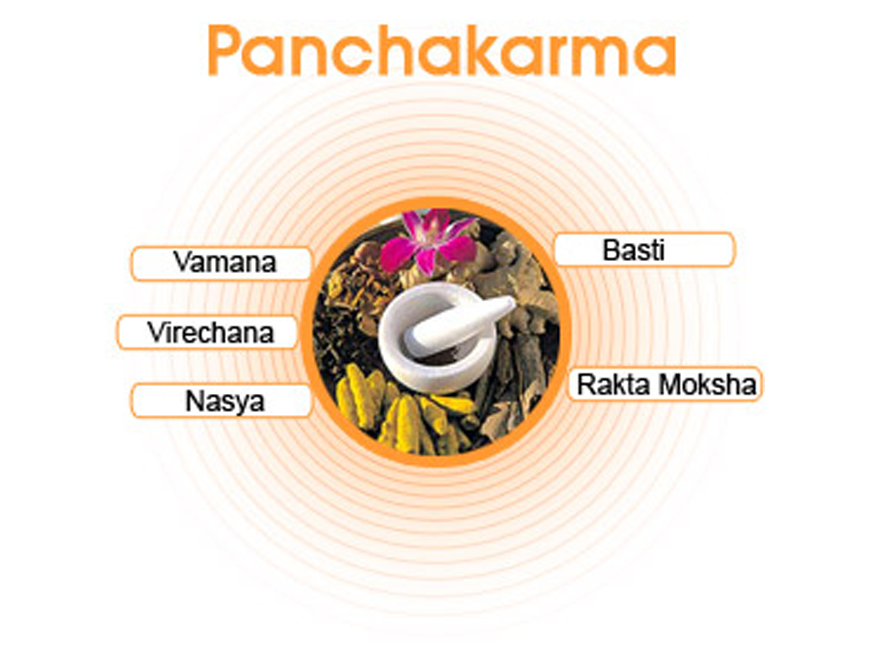 Ayurveda is the science of life practiced by ancient Aryans which is based on Atharva veda, one of the oldest scriptures of Hindus. According to Indian mythology Ayurveda was first perceived by God Brahma. The object of Ayurveda is to counteract the imbalance of three very essential elements namely vata, pitta, and kapha which constitute the Tridosha from which the body originates. It is the Tridosha which regulates the normal working of the human body.

Panchakarma therapy is the vital part of the Ayurvedic management of diseases. All the disease processes point to a crisis of amatoxicity in the body. Panchakarma constitute the foremost shodhana chikitsa or purification therapy because it reverses the disease mechanism which carry toxic waste product from the digestive tract into the tissue of the body.

The name Panchakarma comes from two Sanskrit word ‘pancha’ meaning five and ‘karma’ meaning action. The name incorporates the core of the treatment the five primary actions or procedure which Ayurveda uses to purify the body of everything foreign to it. The five primary actions in Panchakarma are Vamana, Virechana, Vasthy, Nasya and Rakthamokshana.

Vamana is the major pradhana karma procedure of Panchakarma therapy. Literally Vamana means ‘to expel out the vitiated dosha through the oral route’. Vamana is the principal properties of Prithvi and Jala mahabhoota. Vamana karma is the specific therapy for kaphaja disorders. Vamana chikitsa is indicated mainly in the following diseased conditions such as peenasa (nasal discharge), kushta (skin disease), navajwara (acute fever), Kasa and swasa (bronchial diseases) etc.

Vasthy is the next major pradhana karma indicated under panchakarma therapy. Vasthy is the most important chikitsa among the samsodhana procedure. In modern concept Vasthy is similar to enema therapy.

Nasya is generally the last step during panchakarma therapy. Nasya is a term to be applied generally for medicines or medicated oil administered through the nasal passage. Nasya karma is considered as the best and most specific procedure for disease of the head or shira.